Welcome to the newest installment in this series of articles for Zaghareet on the centuries-old tradition of tarot cards. Past issues have touched on their history, basic structure, how to get started reading, and some lesser known ways to use the cards as a tool for self-knowledge. This article will assume some you have familiarity with tarot and now want to learn more about unlocking the potential of the Aces.

What is a Tarot Reading and How Does it Work?

To read the cards, we lay out of a small quantity of cards chosen by chance according to various patterns, and interpret them through a mix of symbolism, intuition, and context. I call this the direct line to your gut instinct. The story told in the cards offers wisdom and sometimes an amazingly helpful mirror to the self. Although cards have been co-opted by Hollywood as a source of unrest and even evil, they have a long, well-documented history for both use as a harmless adult parlor game and a Jungian style tool for self-knowledge.

An overview of Tarot and Aces

Each number value in the cards has certain qualities shared across the suits.
In other words, all Twos have something in common as do all Sevens, Nines and so on. If the Ace is the seed, as the numbers get higher, the qualities of that suit grow, bloom, or increasingly chafe.
Ace – Raw potential, root of the suit’s power, a gateway to the future. Nothing concrete yet, but a potent idea or possibility.
Two – First steps towards manifestation, new beginnings and debuts. Also the start of separation and individuation.
Three – An initial level of stability and accomplishment. Potential is being unlocked bit with far to go.
Four – Stable, accomplished, public recognition or kudos, and a sense of plateau.
Five – My teacher called these Chaos cards! Everything is in upheaval on the way to the next level of development or being.
Six – Whew, Sixes offer new and greater stability as well as a broad scope. Sixes offer a more enduring, mature expression of the suit.
Seven – The Vortex cards! Challenge both welcome and unwelcome, adventure, being shaken up and down, to possibly re-emerge.
Eight – In some ways, this is the suit at its pinnacle of freshness and ripeness. Rapid developments moving to solidity.
Nine – Compost! Nines express the qualities of the suit stridently! Sometimes too much; too much swordliness, too much cupness!
Ten – The absolute fullness of the suit for good or ill. Pinnacle, closure, shifting into something altogether new.

The Aces are the first cards in each suit, from lowest to highest, and stand in the place of the One. An Ace is depicted with one single spot, or image. The next is the Two of any given suit.
The Aces in particulate often refer in a reading to a new venture, new stage of life, or a radically new perspective. Sometimes they are the door that opens to let you out of the crowded room of limitations you have been in – the unexpected job, hobby, relationship, harvest. There are also fascinating parallels between the Jungian based Meyers-Briggs tests and the wisdom of tarot. The curious reader may consider following that discipline, for a more ‘rational; approach to some of the tarot’s wisdom.

Aces in the Suits
Each suit has its own arena of influence and description. The suits are basically the same as those of the tarot’s cousin, the modern playing deck.
Wands – Manifesting, getting things done. Fire, passion, will-power and creative endeavor. Wands make manifest that big art project you have meant to do, the opera you were going to write, the greenhouse you are build or the enormous tiara you were hoping to bling out. It can be more than a project but rather a whole business undertaking. It can occasionally be a fiery and productive romantic relationship. In the Jungian Meyers-Briggs personality parlance, Wands are Intuition.
Cups – Pertaining to a surge of new emotional or spiritual life. This comes up most often for relationships, be they friendly, romantic or familial. Sometimes for the birth of a baby. In the Jungian Meyers-Briggs personality parlance, Cups are Feeling.
Swords – Big, game- and life-changing ideas, the Ace of Swords can also describe the power of new inventions in your life. Swords being the suit of air, the intellect and communication, this card can describe the need for and development of some strong and necessary boundaries. In Jungian Meyers-Briggs personality terms, Swords are Thinking.
Pentacles – Also known as Coins, they speak to the arenas of health and wealth. When the Ace of Pentacles come up in a reading, we are most often looking at Wellness, either of the body or of the wallet. Not likely to come up for a found $5 bill on the ground, but certainly for an inheritance, auspicious outcome on an initial investment, or even for the birth of a baby. In the Jungian Meyers-Briggs personality parlance, Pentacles are Sensation.

In Essence, with Aces, EVERYTHING is Possible
When Aces come up in a reading of any kind, they are comparatively straightforward. They describe new beginnings, but JUST the possibilities. The burden is on the querent to build a bridge of right actions from that potential to the desired result, be it a stable relationship, healthy liver, or a pile of cash. Aces generally ask you to consider, relative to the question, the need for you to make space for something new!

Ace-related Facts and Superstitions –
World War One Flying Aces: Best known to the modern generation thanks to Snoopy’s alter ego in the old ‘Peanuts’ cartoons, a ‘Flying Ace’ in military history is defined as an aviator credited with shooting down five or more enemy planes, and hence, an expert. The term is credited to the French. This definition flows neatly into the next two points of interest.

To Ace an Exam, To Have an Ace up Your Sleeve: In the words of dictionary.com, To Ace It is a slang idiom indicating ‘A person who accomplishes something with complete success.’ It means to come out on top of a challenge. Again, this concept of primacy, being at the fore, dovetails nicely with the Ace being the icebreaker, the leader, for each suit of cards. Likewise, to ‘Have an Ace up Your Sleeve’ means being prepared with the tool, skill, or special circumstance sure to turn events your way, as if one was playing to win at cards. The Aces in most English-speaking countries are the highest ranking cards in the playing deck, and having another Ace may ensure victory.

This is Aces!: A high compliment, superlative. This expression again refers to the Aces primary, i.e. first appearing, status in the deck.

Most interestingly, we come to the Ace of Spades, the Spadille (or ‘little sword’), as ‘the Death Card’: In legend and folklore, the Ace of Spades has been known as the Death Card, and been a popular folk icon in theaters of war. In the Vietnam war, it was used by US troops in an attempt to frighten the Viet Cong, due to a mis-apprehension that the Viet Cong feared the symbol. The Bicycle Card Company manufactured cases of Aces just for the military. Conversely, the Ace of Spades was painted on helmets and craft by soldiers to invoke good luck, due to its fortunate connotations in card playing. 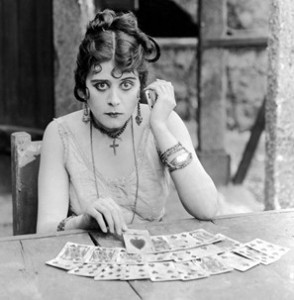 In the film ‘Carmen’, there’s a shot of notoriously mysterious actress Theda Bara cast as a fortune teller. With great soulful eyes she is laying out the dreaded Ace of Spades! This role and shot were reprised by Rita Hayworth. Tarot, of course, has a more imposing designated Death Card in the Major Arcana, which just as sensationally appears in any film with hint of the mystic. The Tarot’s Death card is generally about transformation, challenge, and letting go of old patterns, rather than physical death. The Ace of Swords, as we have seen above, speaks to the potential for big decisions, bold actions and hard boundaries. Those brave steps and radical closures may FEEL like death, but are usually more metaphorical in nature.

Liked it? Take a second to support Onca.Cedilla on Patreon!